Jakarta, 6 May 2020 – Today Telkomsel announced the return of the biggest eSports tournament in Indonesia this year. The 2020 Indonesia Games Championship (IGC) by Telkomsel’s Dunia Games will be held from May to September 2020. In this third edition, Dunia Games collaborates with Garena to host the IGC 2020, which is expected to attract more than 32.000 mobile games enthusiasts from across Indonesia who will compete for a total prize of more than Rp1.6 billion. The initial qualification round of IGC 2020 will be held online as part of Telkomsel’s commitment to maintain physical distance movement as advised by the Indonesian government during the COVID-19 pandemic period.

Director of Marketing Rachel Goh says, ”As a digital telco company, Telkomsel continues to maximize its role as a connectivity enabler during this challenging time through inclusive digital ecosystem that could exceed society’s expectations. This time, through Dunia Games, we have designed IGC 2020 to be held online, to enable participants to contribute to the further development of eSports industry in Indonesia while maintaining their safe physical distance. This also translates Telkomsel’s support to the government’s continued advisory for cancelling or deferring social gatherings to promote physical distancing as advised by the Indonesian government.”

The IGC 2020 is open for all genders, both male and female teams, from amateur to professional players, allowing everyone to reach their potential and contribute to the further development of eSports industry in Indonesia. There are two game genres contested in this championship, including Multiplayer Online Battle Arena (MOBA) and Battleground Survival, both in form of PC game and mobile game. Game title to be contested in the PC game category is League of Legends. Meanwhile, games to be contested in the mobile games’ category are Free Fire, Call of Duty Mobile, and Arena of Valor.

All games enthusiasts across Indonesia can register their teams to join the IGC 2020 from May 6th to June 2020 through igc.duniagames.co.id. Furthermore, participants will join a series of qualification rounds to be held in July and August 2020, during school holiday to ensure that the championship would not interfere school activities at home. A total of eight best teams from each game (12 teams from Free Fire) will be selected to move forward to the Grand Final in September 2020. 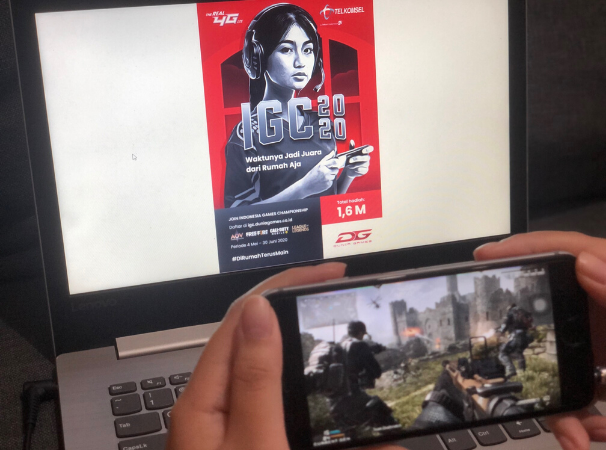 Series of the IGC 2020 tournament can be live streamed through Dunia Games’ digital channels, including website, social media, and YouTube. Telkomsel has also set up a video-on-demand platform MAXstream as an option for eSports enthusiasts across Indonesia to watch the 2020 IGC tournament.

“We hope, the IGC 2020 could meet gamers’ expectation across Indonesia for entertaining program during these unprecedented times of COVID-19 pandemic. The IGC 2020 is aimed at professional players and eSports enthusiasts to strengthen eSports ecosystem in this country comprehensively. We would also try to continue to hold IGC periodically in the coming years and create a bigger impact to advance and strengthen eSports industry in Indonesia sustainably,” Rachel concluded.

Previously, Dunia Games by Telkomsel held IGC tournament in 2017 and 2018. In these two championships, there were a total of more than 22.000 people from all over the country participate in these events. Furthermore, millions of viewers across digital channels owned by Dunia Games have been actively following IGC tournaments in 2017 and 2018. The huge interest showed by mobile games enthusiasts across Indonesia brought confident to Telkomsel to continue to hold this competition while hoping that it would attract more elements in the society to be familiar with eSports ecosystem in this country.

Dunia Games by Telkomsel has been consistently striving to develop eSports ecosystem in Indonesia comprehensively and sustainably across its four main functions as payment gateway, media platform, game publisher, and tournament organizer. Through its digital channels, Dunia Games offers direct carrier billing (DCB) to purchase application and game content using phone credit and media that provide the latest information on games. Dunia Games has also organized thousands of games events, both online and offline, and it has released three games in Indonesia including ShellFire, Lord of Estera, and Rise of Nowlin.