Jakarta, 11 September – #HYPBarengLOOP (translated #HYPWithLOOP) program which has been conducted since April 2017, finally introduced the concept and design of its LOOP Arena. LOOP Arena itself is a place that is intended as the place of expression for various youth communities and is going to be located in 12 cities in Indonesia. At the groundbreaking event, logo and design for LOOP Arena in each of the city are revealed to the public, there was also various performance from local communities.

#HYPBarengLOOP is a program from LOOP which mission is to  facilitate the ambitions and hobbies of various Indonesian youth communities through LOOP Arena, an infrastructure facility which development is tailored to the needs and hobbies of young people in each city, which are Medan, Pekanbaru, Lampung, Serang, Bogor, Cirebon, Semarang, Banyuwangi, Malang, Balikapapan, Makassar and Manado.

On the journey & survey stage that took place in April and May 2017, #HYPBarengLOOP organized a trip to twelve cities along with four popular key opinion leaders among teenagers, namely Han Yoo Ra, Ronal Surapradja, David John Schaap, and Bisma Karisma. On this trip, LOOP and the four KOL met and discussed with various local communities, to accommodate aspirations and identify passion points of various community in each city. 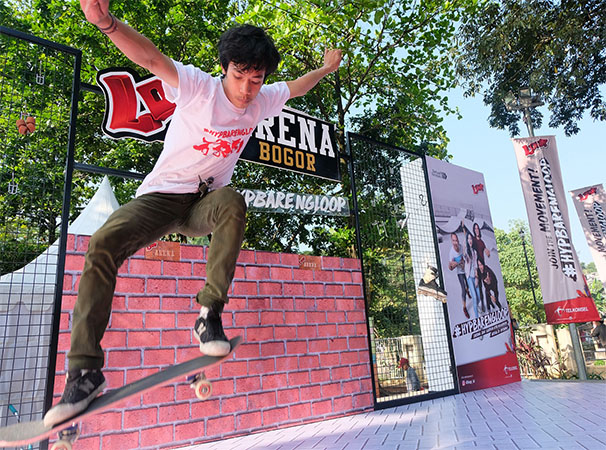 Based on the survey results, several main passion points of youth in each region were identified, such as skateboarding, basketball, BMX, futsal, art and music. The results of this survey then became the main inspiration of LOOP Arena design and development in each city. The construction of LOOP Arena itself is planned to be completed soon and can be utilized for various activities of local communities at the end of October 2017.

Vice President of Brand and Communications of Telkomsel, Nirwan Lesmana said, "LOOP always supports positive Indonesian youth activities, for example in sports, arts, and others. We believe this positive activities can be useful and will continue to grow if it gets the right support. Hence, we bring #HYPBarengLOOP program so we can gather the aspirations of youth and their communities about their hobbies. "

Since its launch in March 2014, LOOP has received a positive response among young people with its competitive and creative product offerings in data and digital services. Nirwan then explained that in line with his tagline 'This is WE', LOOP is also committed to give more value to Indonesian youth, by continuing to provide a forum for them to express and develop themselves.